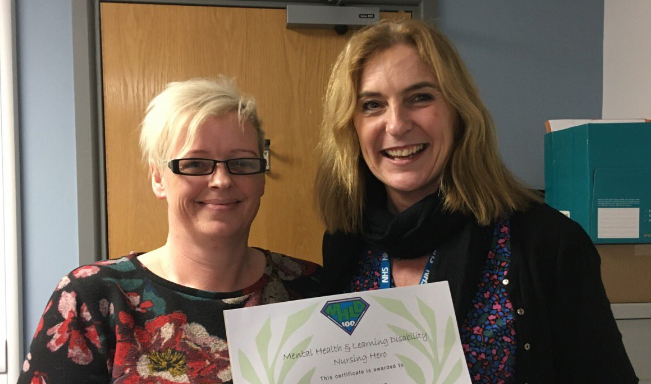 Victoria Williams, Veterans' Lead Therapist with the Swansea Bay team, has received a Nursing Hero Award. The Awards celebrate a 100 years of nursing in the Mental Health and Learning Disabilities unit in Swansea Bay Univeristy Health Board and the awards are given throughout the year to recognise outstanding contributions to the field of nursing.

Victoria, who is a mental health nurse by background, was nominated by Donna Sharp , Adult Service Manager for Neath and Port Talbot (pictured left with Victoria). In her nomination, Donna described Victoria as 'an inspiration' and cited Victoria's passion for working with Veterans, as well as her commitment to improving the delivery of therapies through research, sharing her expertise with other therapists and an continually developing her own therapeutic practice.

In June 2019, Kevin Hackett, Change Step Peer Mentor for Veterans' NHS Wales Betsi Cadwaladr UHB team, was awarded a Bronze for his work in the community. He was presented his certificate by Sean Molino who organised the awards (pictured below). As a peer mentor, Kevin works with veterans from the point of referral to identify any health and social care needs. Kevin then provides information and direct support for veterans so that these needs can be addressed at the earliest opportunity, often before their therapy starts. As well as working with VNHSW, Kevin also holds a number of key roles in the Armed Forces community where he contributes his experience, expertise and commitment to veterans services. You can find out more about Kevin's work in the community by reading Kevin's award profile.